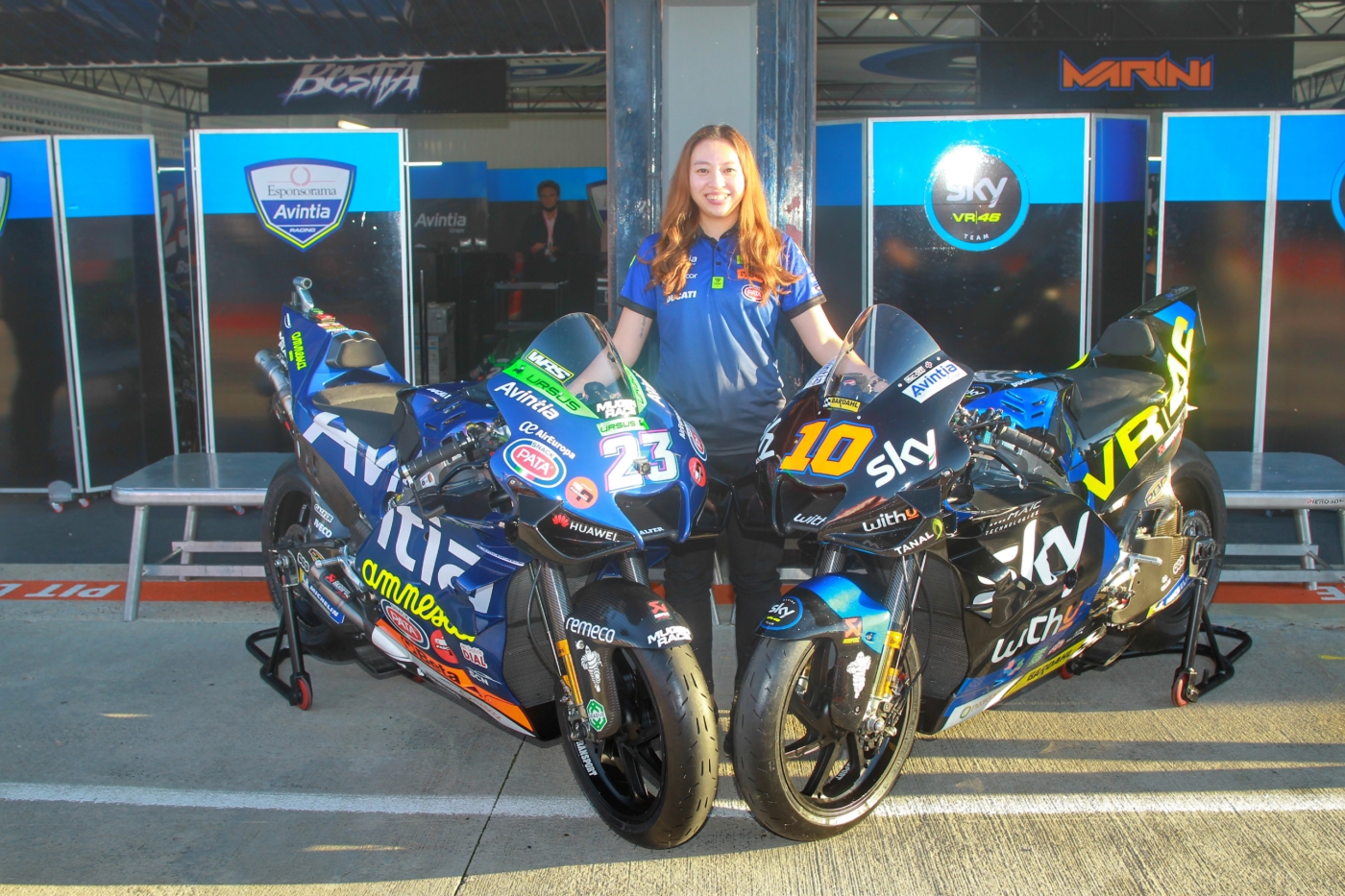 MotoGP had its short run of a Chinese Grand Prix back in 2005 through 2008. Even though the MotoGP circus does not come to China anymore, a small and close fan base is still active in China, and some of the fans even made a professional career out of it now in the MotoGP paddock. Our story today is about Avintia’s Communication Officer Jiaxin “Kaka” Tang (or Gasing Tong in her native Cantonese), who got hooked on the sport because of the nine-time World Champion and MotoGP Legend Valentino Rossi, and even got to work closely with Rossi’s team for one season.

Born and raised in Yangjiang, Guangdong Province, MotoGP didn’t catch Kaka’s attention until her senior year in high school in 2004. Her desk mate invited her to watch Rossi’s first race with Yamaha together that weekend. We now all know what happened to Rossi and Yahama that weekend. What happened to Kaka? She found a new favorite sport. “It was 2004, my desk mate told me her favorite rider Valentino Rossi just moved to Yamaha, and she said we should watch their first race of the season together. I did, and it was eye-opening. I never knew a sport can be this exciting! That was when live broadcasting of the race was still available in Guangdong, so I started watching every race weekend that season.”

But then MotoGP went on pause for Kaka for a few years when she was in college and broadcasting was not available anymore. Then when Rossi moved to Ducati in 2011, Kaka started watching again, and this time, she went to the circuit, and her pursuit of a career in MotoGP began. “Watching a MotoGP race on the grandstand was a real experience. I decided this was what I wanted to do as a career. I started working with Hupu.com (one of the sports websites in China with a big motorsport community) as their reporter. At the time because it was online so it was considered new media compared to printed magazines. Now looking back, with all kinds of social media platforms around, that was like a more traditional media job. The deadline for your race report back then wouldn’t seem so imminent. Additionally, motorcycling was not the key focus among motorsport fans in China, so my life during race weekends was a bit relaxed.”

Then in 2019, Kaka moved to the other side of the paddock, she joined Avintia as their Coordinator Assistant, and it felt like jumping from some national junior championship straight to MotoGP. “In my first race, it was really overwhelming, I got my head turned around. There was so much going on in a coordinator’s job, so I bought a little notebook for the first time in my life to keep track of things. I was so worried I’d forgot something big. I learned so much in my first season with the team. I also got lucky in a way, I got to celebrate Eric (Granado)’s 3rd place in the MotoE World Cup with the team in my first year. That was nice.”

Working in the paddock is perhaps the dream for many motorsport fans, but when you actually start a job with the team, it can become excruciating, because you would be working, while your favorite event is taking place. “When I joined the team, I actually had less time to watch the races, especially the MotoGP races. When they are racing, I’d be coordinating our exit from the circuit, so I can’t be always looking at the screens.”

This season, Kaka moved to a new role within the team, she became the Communicating Officer. It’s a familiar role as she started in the media capacity in the paddock, but media changed so much in the past few years, Kaka also needed to pick up new tricks for the role. “Social media made it all about what is happening right this moment and what happens behind the scenes. I was learning and exploring and experimenting at the same time. There are also the more traditional media things in my job. I need to work out the media schedule for our riders, including their interviews with the media from Thursday onwards. One tricky thing is obviously to give our journalist friends as much as possible while letting our riders get as much rest as possible because of course their most important job is to race and get great results. I myself need to prepare our English and Spanish press releases every day to be sent out as soon as possible.”

If it doesn’t sound difficult enough already, try doing that for three classes and six riders during a race weekend. Avintia races in Moto3 and MotoGP classes, and the MotoE World Cup in the three years Kaka has been with them. She jokingly refers to the Grands Prix featuring MotoE races as ‘death weekends’. “Thank goodness I got the Moto2 race as a breather in between. When we have all three teams here, I’ll probably have to skip lunch or dinner. The most complicated is when one of our riders qualifies for the front row or is on the podium and then the next class is about to start racing. For example for Doha GP this year, when Niccolo (Antonelli) was on the podium, I had to go to the interviews with him, but the MotoGP race was about to get started too. Luckily I had our Coordinator’s support so we can cover the different places at the same time.”

Even though winning gives you more work, it’s still the sweetest moment. “I think people follow racing for the wins and podiums. Same for all the people in the paddock, same for me. My highlight so far is definitely when Eric took his two wins in Valencia in 2019. Our podiums in other classes were also great and special moments, though we may not always have time to celebrate. I remember for Johann Zarco’s podium we just had some champagne in the box after he was done with all the interviews because we needed to get to Austria for the next back-to-back race. Same for Enea (Bastianini) this year, we just had the team together for dinner to celebrate.”

The 2021 season saw the last appearance of the Avintia team in the MotoGP class, but it was also special for Kaka in another way – she got to share the box with her idol Valentino Rossi, in a sense. “I was so thrilled when I heard the news that Rossi would field Luca (Marini) with us. But all the excitement aside, I still need to remain professional when I’m working. When I put on the team’s uniform, I’m not just me, I represent the team. If you do anything unprofessional, it’s not just your own image that’s affected, it’s also the team’s. Besides, having an idol means there is someone that motivates you to become a better person. I think it’s exactly because of Rossi, I care more about the details in every aspect of my work. I’m really grateful that Rossi brought me to the sport in a way.”

No matter what you do, I think having a positive attitude is key. I would stop if I’m not enjoying it anymore. Difficulties won’t bother me, they wouldn’t keep me down. As long as I still love this, I’ll find a way to overcome the difficulties.

With ten years in the paddock, Kaka still looks forward to more challenges down the line, and more fun. “There are so many excellent people I can learn from in the paddock. I’ll just keep my head down and keep going. I’d like to try all the different jobs I can in the paddock. Of course, this could also just be a dream. I’d like to also visit the WSBK paddock sometime. I heard they make it a big party in the paddock.”

Like Kaka mentioned, motorcycling isn’t under the spotlight in China. With now CFMoto entering Moto3 with KTM supplying the bikes, would things start to change? “I think we need to work on the young riders. Of course, there needs to be support from the government. If one day Chinese riders can get into the World Championship, our fan base might grow because of it. CFMoto entering Moto3 is definitely a great thing, our fans might feel more involved. Unfortunately, I’ve seen some negative comments on this saying it’s just KTM bikes re-branded. I mean Rome wasn’t built in one day, let’s take it one step at a time, CFMoto joining is already a great start. We really need all the support we have to move Chinese motorsport forward.”

Like always, we end our conversation with what Kaka would advise the young generation who wish to get involved in motorsport. “You need to know what you want. In the beginning, you might feel great about the atmosphere and all the new things you are seeing. But after you’ve been to a circuit 10 times or 20 times, your mindset would change. So you need to be sure. Learning another language besides English is important, you will fit in much better if you can speak Spanish or Italian. Most importantly, when there are not that many Chinese around in the paddock, what you do reflects on our image greatly. I hope more and more Chinese youngsters can join us in the future.”

In 2019, Kaka gave us tremendous support during Thai GP. Of course, that was the last GP we visited because of COVID-19. We hope one day we could see Kaka in the paddock again, and we wish Kaka a fabulous 2022 season in the World Championship.