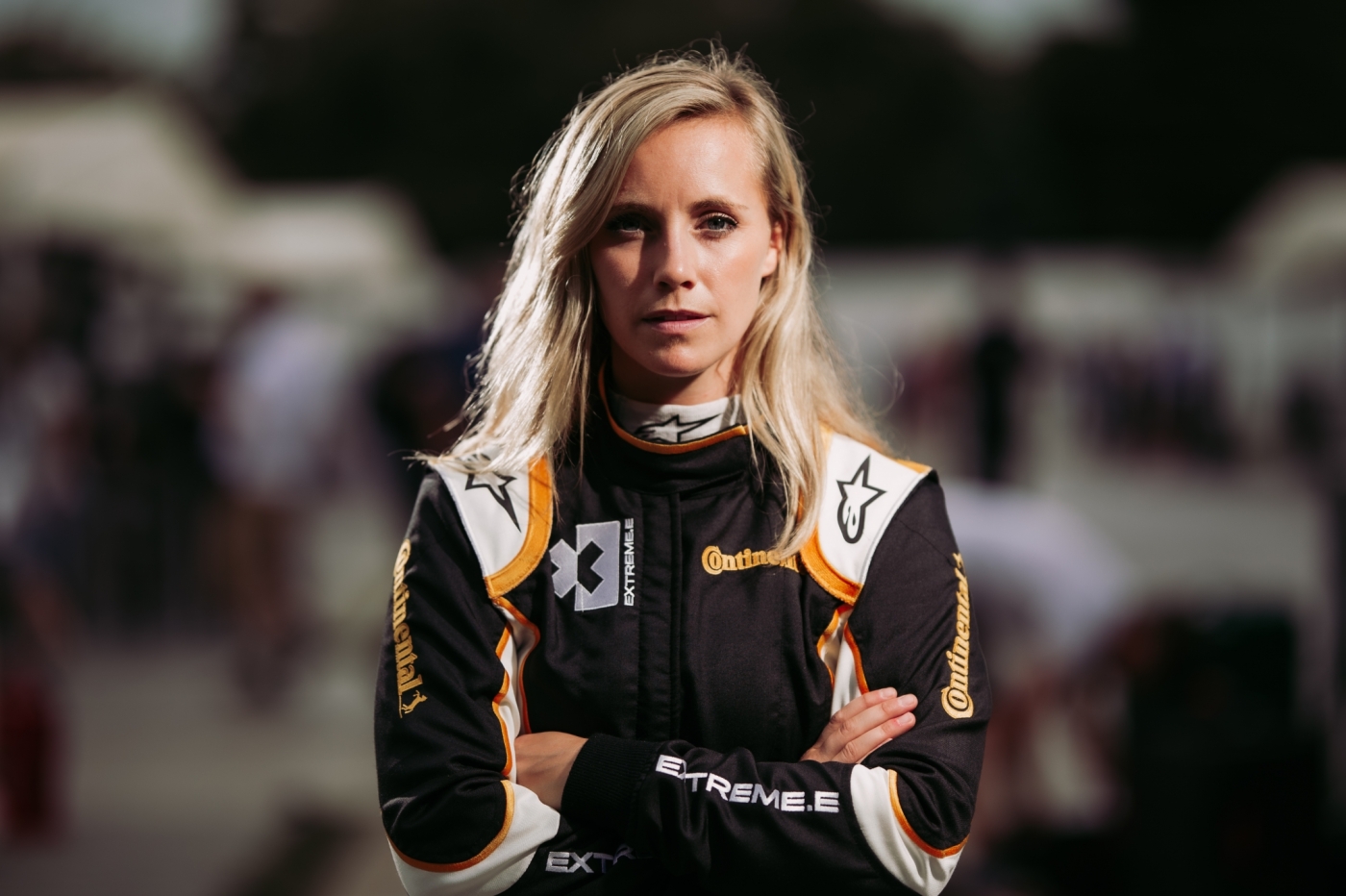 As the last Formula 1 World Champion to be lured into Alejandro Agag’s ambitious dream of electric Odyssey, Jensen Button teamed up with one of Agag’s first partners in crime – Continental test driver and brand ambassador Mikaela Åhlin-Kottulinsky. The start of the journey wasn’t easy though. JBXE qualified 6th in Desert X Prix, but wasn’t able to get in the Final through Crazy Race and ended the round in 6th. Before Ocean X Prix, it was announced that Kevin Hansen will replace team owner Jensen Button as the male driver. The team made huge strides in Ocean X Prix, qualifying 4th, securing themselves a spot in the Final through Semi-Final 2, and ending the round with a podium finish even if Mikaela’s race only lasted the beach straight and the first corner.

We caught up with Mikaela before and after Ocean X Prix, let’s hear about her experience in developing the tyre for Extreme E as well as her career in motorsport.

Born into a family of motorsport, Mikaela Åhlin-Kottulinsky followed a motorsport path slightly different from her grandfather and parents. Freddy Kottulinsky, Mikaela’s grandfather, was the only Swedish driver to have won Paris Dakar. Mikaela’s mother Susanne Kottulinsky is a European Rally Champion, and her father Jerry Åhlin is a Junior Swedish Rally Championship. While her brother Fredrik Ahlin follows the exactly family tradition of off-road racing aiming for WRC, Mikaela went into touring car racing. “My family has a rallying background but I hadn’t considered rallying or off-road, to be honest, from the beginning. I was very into racing and that was my goal. But I’ve always been driving on the snow and on the ice during the winter. I always thought it was fun.”

On this path she paved for herself, Mikaela became the first female driver to win in Volkswagen Scirocco R-Cup in 2014, as well as the first female driver to win in the Scandinavian Touring Car Championship in 2018. With eight years of road racing experience after her karting time, Mikaela found an opportunity to head back to her off-road family roots – Extreme E – and even expand more into rallying. “I did some Rallycross in 2014, which was also a really great experience. But I guess since I had more racing experiences in touring cars, I just continued that way. Now with the opportunity in Extreme E driving some off-road vehicles back home, I might be able to do some rally events this autumn in Sweden. So that’s the goal to gain even more experience for Extreme E, because I feel that this is really developing for me.”

I love the challenge and I love driving a car like this. So yeah, there might be some rallying. Let’s see.

Mikaela’s experience with Extreme E started with the tyres though, before the groundbreaking racing series was even fully formed. “It all started when I was the ambassador for Continental Sweden back in 2018. Then we worked together with the headquarters, launching new winter tyres and testing them on the snow and ice in Finland. It was great cooperation. So after that, I got the phone call from Continental saying that they are involved in a totally new motorsport series with an environmental focus. It’s going to be electrical-driven cars, off-road, and in the most extreme places. They wanted me to be a part of the tyre development team. I was really, really happy to be a part of it. But I also said to them from the beginning that even though I have off-road in my blood, I don’t have that much off-road experience. But of course, Continental had so much off-road experience from before.”

The development of the tyre started before the car – Odyssey 21 – was ready for Continental. Then like everything else, the testing schedule was interrupted in 2020. But as we have seen in the desert of Saudi and on the beach of Senegal, with Mikaela’s feedback from the limited testing time, the car and the tyre worked perfectly together. “When we started to develop the tyre, we didn’t initially actually have the car. So the car came then mid-2019. We drove it at Goodwood Festival of Speed. We did the first proper test in France in the autumn of 2019. We had two days of testing, and we had the first feeling of the tyres. We were discussing that a little bit of stiffness on the sidewall will help make sure that the tyre would take all the impacts from all the different surfaces. We didn’t get any more tyre testing than those two days in France because COVID came June 2020. We were not allowed to travel and so on. Then we also had to start producing the tyres quite early in 2020 for the mold to be finished and loaded on the boat. We were so happy after race one and the tyres were working really well. I’m very certain that they’re going to work well for the next events as well. It was really a challenge for us to make sure that the tyres are going to work on all the different surfaces.”

I felt that the whole concept about Extreme E in coorperation with Continental was so exciting because it was something that I loved in combination with a really good cause. It is a really good message from motorsport that development is not only from the technical side, but from sustainability as well.

Mikaela came in Extreme E first, but she was also the last driver to be announced in the official line-up. And as her tyre testing schedule was interrupted, Mikaela actually came into Saudi with a bit of a disadvantage, having missed the Aragon official test as well. “If we would’ve followed the original plan tyre testing plan then for sure I would’ve been most familiar with the car. But in reality, since JBXE came in pretty late to the series, we didn’t do the pre-season testing in Aragon. We saw during the first race weekend that it was a shame that we weren’t part of Aragon. We had to learn a lot during the first race weekend, it was the first time for us to really properly driving our car. We’ve been analyzing all the data from that, a lot of good information to be taken with us. We also have strong cooperation with Lotus engineering. It’s going to be really interesting to see how all the information we had from Saudi would help us on track in Senegal. ”

Extreme E didn’t just take Mikaela back to her family roots of off-road racing, the Ocean X Prix took place at Lac Rose, Dakar, where Mikaela’s grandfather won Paris Dakar. Before the race, Kevin Hansen, the youngest ever FIA European Supercar Champion, replaced team boss Jensen Button to become Mikaela’s partner. The new partnership brought back a podium finish, which would definitely make the late Paris Dakar winner proud. “I worked with Kevin in the tyre testing, but it was only one day with him, so it wasn’t so much. I’ve known Kevin since I was 12. His brother (Timmy Hansen, Andretti United male driver) and I raced together in go-kart. Kevin and I have both been on the Swedish National Team for many years. Kevin has also driven with me on ice. Two days after we found out we would be driving together, we met up in Sweden and drove some off-road vehicles together to find our driving style and prepare for Ocean X Prix weekend together. It’s really great working with him this weekend. Our result really developed from the previous round. Coming into the Ocean X Prix, we were much more confident than before the first event as now we’ve also had the time to analyze the data and try to figure out the different settings. We came into the weekend much stronger. Kevin has done off-road rallying. He has a lot of experience from the Rallycross world. I think those things in combination is what made us much stronger this weekend. Because there is so limited time of driving, we developed the car and changed settings through each session. We dared to take big steps and make big changes. I feel like we know so much more about the car after this weekend. I’m really proud of the work we did with the team this weekend.”

It’s really special to come back to Dakar. It’s 41 years ago when my grandfather won Paris Dakar. I definitely believe that he’s watching from above and that he’s proud of what I’m doing.

Since Mikaela’s childhood, she has been so used to driving on ice and snow, so it’s probably not a surprise that Arctic X Prix is the one she’s most looking forward to on the calendar. “Even though we are not going to drive on the glacier or ice and snow, we’re going to drive where the glacier used to be. I’m really looking forward to it, but I also think it’s going to be tough because it’s going to be really visual what we are doing to our earth and how the glacier is melting and how it is a big issue for our environment and our world. Of course, I’m excited about the other events as well. All the events would be challenging because they are all going to be so different. You really have to adapt to what is ahead of you with so limited practice time.”

And as always, we wrapped up with the question of ‘why fans should follow Extreme E’. Here is Mikaela’s take – “Because it is the most extreme motorsport you can see.”

Next month on the 5th, before Extreme E comes back for Arctic X Prix in Kangerlussuaq, Greenland, we have another installment in Extreme E Drivers Series.