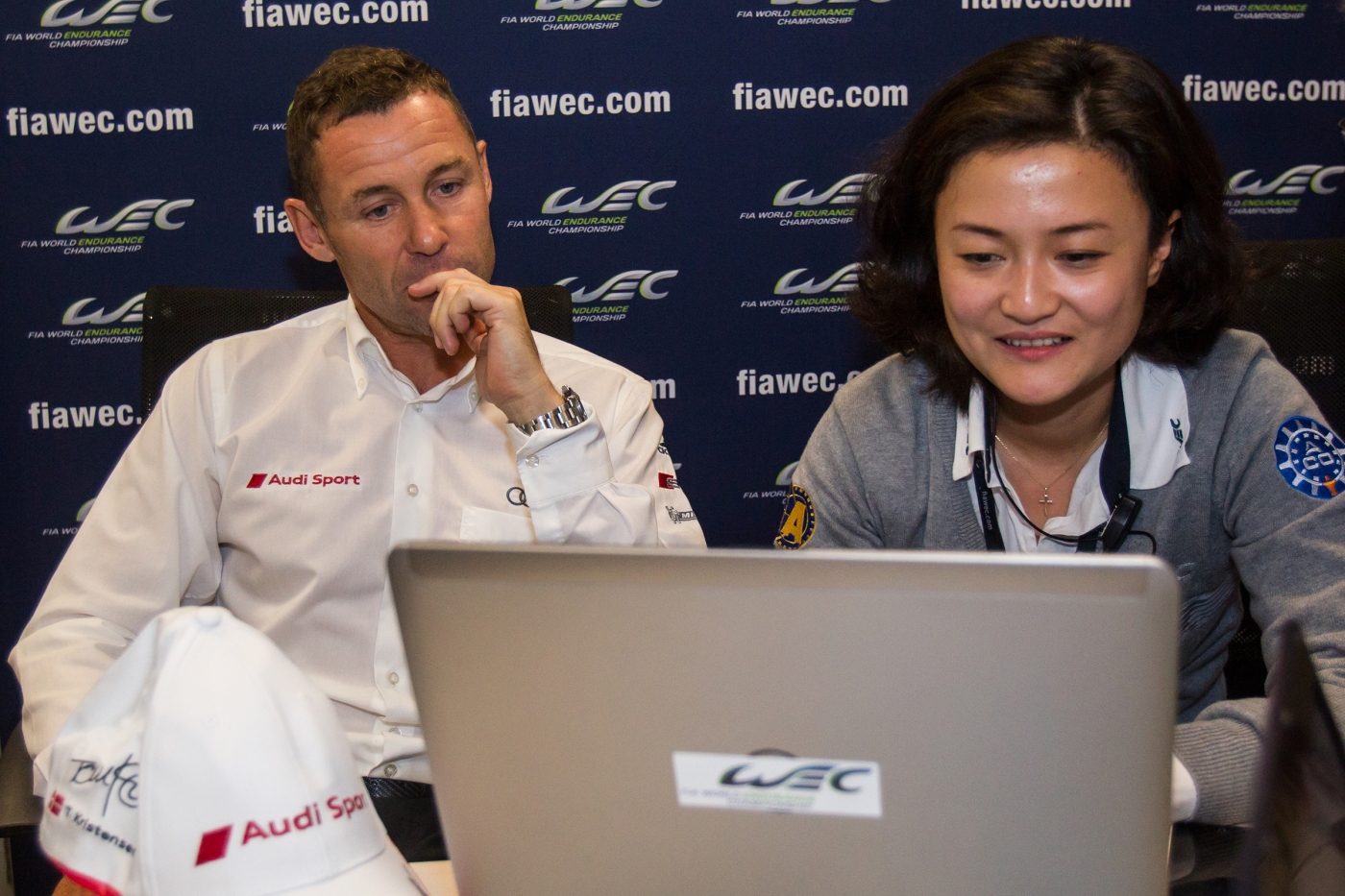 This interview is originally in Chinese, read here

We spotted her in certain drivers’ Instagram stories. It was at an autograph session of WEC, an Asian woman in uniform with the organizer logo was holding her phone and taking a video of the interaction between drivers and fans. To record and post the event is part of her job. A woman with an Asian look, in a male-dominant sport, originated from Europe, she surely stands out. Who is she? What does she do? How did she get there? In November at the 4 hours of Shanghai, we talked to Juliet Zhu about her experience with Le Mans Spirit.

Juliet graduated from Shanghai Theatre Academy, majored in Drama and Literature, she’s nowhere near the world of motorsport. Her first job was program director at Shanghai Media Group, and then she left the system and went for an account manager role in a PR agency. Before heading to France for her MBA she was working her dream job as an associate marketing manager for Hong Kong Disneyland.

“I already had experience in social media operations from my time at Disneyland, I’m familiar with both Chinese and overseas SNS. During my study in France, I also found an internship regarding social media networks, so it is in this domain that I was searching for jobs.”

“When the opportunity came, I couldn’t refuse it. And it didn’t come across by accident. It is my previous work experience on social media that drives me to apply for this job at WEC. My boss was looking for someone outside the motorsport world, who had no background in this industry. It kind of surprised me. To be honest, I couldn’t even tell the difference between prototype and GT, but my boss didn’t mind. So I went for the job interview. They went through the job description item by item, thoroughly and strictly, checking the education background, abilities and such. I was chosen over another candidate from the States, my boss said it was almost a decision out of instinct.”

Then came my first race on site. It was the season opener at Silverstone in 2014. I missed the prologue that year because of some personal errands, so Silverstone was my first attempt at this championship. My first task on my first day was to catch the flight to Silverstone.

Back in 2014, WEC consisted of 5 categories, with more than 20 teams and over 70 drivers. As the social media manager, to demonstrate the sport to the audience, Juliet had to review every 6 hours of the races, as well as looking up for historical data and statistics, including for example fastest laps, lap records and so on. Imagine the workload.

“I was lost at the beginning. After Silverstone came Spa, and then it was Le Mans. The first time I stepped onto the track, it was at Fuji, I left the pitlane, and that’s when I felt I owned this job. It took me half a year to get familiar with everything, and it changed here or there when the new season arrived. Whether you have the background or not, the teams and drivers come and go between seasons, and you always need to learn and adapt. Up till now, I can proudly say that I know each social media account of every driver and can recite their profile names on each platform, thanks to my naturally-born sensitiveness I guess.”

“I went to Le Mans that year with broken toes. Because I was the first employee in my department at that time, everything needed to be done by myself. The media center was on the third floor and there was no elevator, I had to go up and down the stairs with a crutch. ” The race lasts 24 hours but the work time lasts even longer than that. Only a 2-hour break was taken in the battle of endurance, for nap and bath, to better continue her job.

While the pressure sounds unbearable to others, Juliet lives peacefully with it. “Because this is what I am used to at work, I was trained to be under pressure. For me, it’s a good thing to be driven by pressure, and I’m not running away from it. The biggest burden for me is the constant travel and jetlag, and how to balance work and personal life becomes a question at the early stages. My fiancé and I couldn’t see each other much because I’m always on the way and the time difference is disturbing too. But we had a lot of conversations and put great efforts into it. So I need to have family support here. Other than this, you know we have to present season reviews, updates and media strategy etc. to manufacturers, partners and related parties every year, it is me who show them the figures and I’ve got KPI to accomplish, but to be honest it’s my kind of business so I’m enjoying doing all these stuff.”

Humans are not designed to be perfect under pressure, they make mistakes. Young people in the team bring loads of creative ideas but they tend to make more mistakes than the seasoned ones. The thing that matters is to not repeat what you’ve done wrong.

“But even if you’re wrong, as a team they won’t blame you, instead they come and help you through. “

“There’s always the language barrier, so I must have done something terrible before in typing or grammar on our official account. But my team was never like ‘blame it on her because this is her responsibility’, my boss would take it and be like ‘it’s my fault to not make it clear enough for her’. It’s this wonderful culture here, a vivid example of the Le Mans spirit, that people help each other, make progress and grow from their mistakes. It’s just like the racing here, we’re not single-seater, we’re multiple-seater. Team players are what we are.”

But questions arose when people see an Asian woman in this male-dominant European-based motorsport. People may wonder who she is, where did she come from with many hows and whys.

“I’ve got the feeling that because you’re female, no matter Asian or European, you’ll need to be 2 or 3 times better than males on the same line of work to meet people’s expectations. The inequality exists, but we’re trying to diminish it. Meanwhile, even though the unfairness is there, you shouldn’t pay much attention to it and just do your job excellently.”

“This is my sixth season on board; I’m growing with my team. Now I have other three colleagues in the department, all males, by the way. We’re in this together. At the beginning they had doubts about me being an Asian woman in the western country leading a European team, I’d say there might be a little prejudice, but now they often call me Jedi, as for mentor or master, with respect. So a lot of Star Wars reference is implied in our daily conversation and they’ll see themselves as Padawans somehow.”

“The trust is built step by step by proving your capability. Like cooperating with Audi or Porsche, you’ll have to pull your best and show them the top result you can get to establish the trust. They’ll start to believe in you once they see what you can do. Sometimes a little persuasion is needed. The proof of a good relationship with the partners is that they’ll come to you and ask for your opinion. It took me almost three years to build trust with teams and drivers, and my boss helped a lot in this process.”

“We’ve had so many programs with teams and partners and we’re proud to have finished each one of them with our greatest efforts. Now I feel fulfilled looking back. I won’t regret every single day I had with this series, and unlike working at other companies, the idea of changing jobs never occurred to me here.”

My boss used to say to me, “you’ve done this so well that you’re not like a Chinese anymore.” I can’t decide whether this is more offensive or more like a compliment.

Cultural conflicts lead to divergent methods. People work and communicate differently in Shanghai compared to other races. Being the Chinese in a French organization, Juliet takes responsibility to bridge the gap.

“I’ll pay less attention to the social media part and focus more on the coordination. One year there was a mechanic who was hit by an oil tank. Westerners are used to be humanized so they wanted to use Pethidine immediately. But in China, you need the doctor’s prescription to use it. So I was in the middle of the injured mechanic who was in pain and Chinese medics who just followed rules and regulations, it was a very difficult situation. The mechanic was thinking that I wasn’t pushing hard enough and the medics were blaming me for trying to break the rules. Cultural difference and language barrier happened a lot during our stay in China and I’ll have to solve such a problem.”

“Things started to get smoother when Jackie Chan and his team joined us, and it got even better after KCMG won LMP2 champion at LM24h in 2015. It changed a lot of things and it changed me a lot. I don’t feel like I’m in this battle alone anymore.”

Although racing and competition remain the biggest themes, women are undoubtedly also an important part of motorsports. Engineers, mechanics, media and management, there are women in all these positions. WEC’s social media team also shed the spotlight on this aspect. For example, on the International Women’s Rights Day in 2018, Juliet posted a video special on their official account to introduce the staff behind the scenes to the audience and fans. Women in various positions working at WEC, each chose a song that best represents women’s power, and recorded it into a lip-sync video to sing out their voices. “We may not have the commercial capabilities to run track events like D2BD and FE, but we can do small things that are real, practical and truly touching.”

The 24 Hours of Le Mans was born in the 1920s, one can say it’s a product of our grandpas, while the young generation nowadays pursues more individuality and self-realization. Can Le Mans’ team spirit still resonate with them?

“Personality can exist, but when you are with the team, you must have priority and be team-based. Everyone can have their personality and ideas, but everyone must also be able to achieve a common goal. We made a season preview one year, with the slogan ‘This world has no me, only us’. This cannot be one person’s game. It is the team that takes the failure together, progresses together, and moves forward together. This is the Le Mans spirit. “

As a conclusion, we asked Juliet for three suggestions for young people who want to enter motorsport.

“Eat, drink, dress well. (Laughs) First of all, no matter what age and gender, you must believe in yourself. Don’t define yourself and say that this world is a man’s world, that way you lose before you’re here.”

“Secondly, if you decide that this is what you want to do, don’t hesitate. Last but not least, because we are doing endurance races, you may be hindered or slowed down or crash, but you can’t easily give up. Lap by lap it leads to victory, and when you look back and see the distance you have marched, you will realize how many difficulties you have overcome. As long as you have enough determination, you will be successful. “